Insight‐AWP has been involved in the examination and management of productivity on mega projects since 1998 and conducting Time on Tools studies and applying Advanced Work Packaging (AWP) and Installation Work Packages (IWP) in both North America and Europe over that period.
The system utilized for Time on Tools analysis is a proven methodology that is recognized as a key measurement tool within industrial engineering.
Working with both COAA (Construction Owners Association of Alberta) and CII (Construction Industry Institute), Insight‐wfp staff have been key contributors to the model for Workface Planning and have applied the process to 24 mega projects.
In 2015, Insight‐AWP were contracted to perform Time on Tools studies and WFP audits at the Project-N site by the Owner. The studies started mid‐February and concluded late September 2016. Twelve study cycles were completed across the 9 major units, comprising of over 80,000 total observations. At the close of each cycle, a report on the findings was presented to the specific Construction Management Team, Mechanical Contractor and the Owner’s Project Management team.
The reports were presented to the Construction Management teams with cause and effect observations that supported the numerical evaluation. Commitments for actions by the CMT and the Contractor were then logged and tracked by the Owner’s PMT.
During the period of the Tool Time analysis, Insight‐WFP also conducted specific audits of Workface Planning practices against each area based upon alignment with the Project-N AWP procedure, which had been issued with each contract. The results appear in the chart as the AWP score, which is a % of compliance with the procedure. 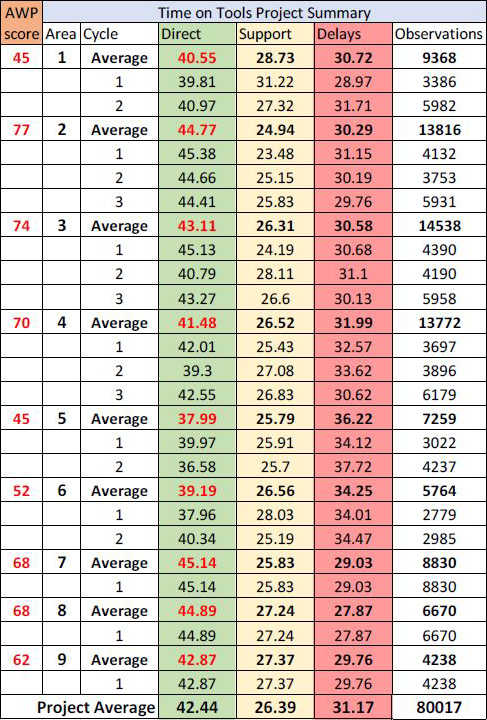 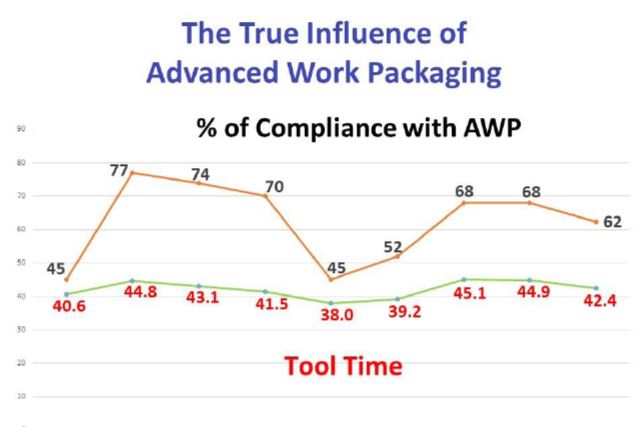 This chart clearly demonstrates the alignment between compliance with WFP principles and activity levels of the craft workers.

The delta between the most compliant (which is still only 77% compliant) and the least compliant (business as usual) is 38 to 45.1 % Direct Activity which is 7.1%
7.1 / 40 = 17.8% increase in productivity, which averaged across the project shows that if all contractors had achieved 77% compliance then the project costs would have been reduced by $356 Million and 65 days of schedule per year.

This would have a generated a return on investment of 900%, based on the cost of implementation at 2% of Direct Labor.