In November 2014 Insight-AWP was engaged by a Houston area refinery to apply Advanced Work Packaging and deliver a stable construction environment with predictable project outcomes to one of their construction projects. The typical North American construction contractors are quite cavalier when it comes to planning and it is typically done on the fly by the Foremen. The Foreman looks around at 6 am to see what manpower and materials they have and then sets out to keep his workforce busy for the day. Our challenge was to move this planning process upstream and off the Foreman’s plate so that they could do what they are paid to do: Supervise safety, productivity, and quality.

Insight-AWP had worked with ConstructSim before and this project was the sixth time that we have used it on a mega project, so we had a good understanding of how to use it to optimize our deliverables. We were very confident that our model for Workface Planning would bring long-term benefits to the project, but we needed both the support of information management and the sexy, in your face, data visualization that wins over the construction cowboys. So we selected ConstructSim as our tool of choice and engaged Bentley to provide the software and the support services that would meet our needs.

The project was unique in that the construction contract was a fixed price. The owner realized that they were still exposed to risk through claims and schedule compliance so they offered to pay for the cost of planning and the software. This still put us in a position where we were coaching the contractor on how to build plans in an environment where the contractor would normally be left alone to execute as they saw fit. The first couple of weeks were quite tense and we experienced heavy resistance from the contractor. While the idea of planning seemed fundamentally good to them, it was the 3D images of project data from ConstructSim that helped the construction team get onboard. It was like a light came on for the contractors and they quickly realized that the combination of planning and information management that came from ConstructSim was a win/win business model.

Kudos go out to the Bentley and Insight-AWP team members who were the boots on the ground during this stage. Their patient approach helped the team focus on removing roadblocks rather than finding excuses. This leadership eventually turned our strongest opponents into our greatest advocates.
This was the first time that we had worked with the i-model and the Work Package Server and we were tentative about the ‘hands off’ feel of the process. Kenny and Joel’s professionalism helped us to feel more comfortable and we eventually came to appreciate the fact that we could hand them a dog’s breakfast of data and receive a functioning i-model in return.The Work Package Server was the ideal application of a document control model that we have been

The Work Package Server was the ideal application of a document control model that we have been advocating for many years. A single source of online documents where the contractor can search and pull electronic documents as they need them, this allowed us to manage document revisions with near-zero
lag time. This is the first time that I can remember a project where we had virtually no issues with construction working off the wrong revision drawing. The proof of how effective this process was is that the Contractors scaled down their Document Control departments and relied upon the Work Package
Server and their Workface Planners as their source for project documents. 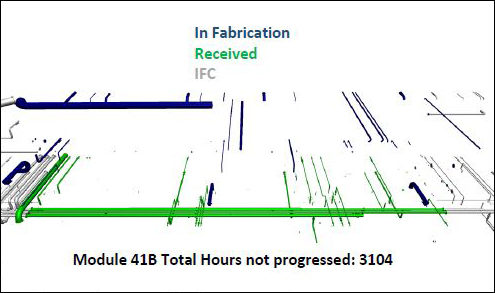 The true value of data management in ConstructSim became evident early in the project when we needed to ship modules from the mod yard before they were complete and we needed to know exactly what was not complete, whether we had the materials and how many work hours we had to move to the fixed price contract. The ConstructSim admin produced this graphic within a couple of hours and the project folks, standing agape, started to realize the power of data managed in a 3D environment.

As the project progressed we had numerous examples of complex questions posed by the construction management team that were typically answered on the same day. We also had the usual series of issues that come from the intense scrutiny of data, like steel members out in space and naming convention errors that had gone unnoticed. ConstructSim quickly high-lighted these issues allowing our engineering team to focus on specific solutions.4D simulations: